The Eolian archipelago is formed by seven islands surfacing from the sea north-east of Sicily and they spread out with an arch of 45 miles.

The home of Eolo, god of the winds though here fire prevails over air. Of volcanic origin, with Stromboli and Vulcano still active, the islands offer the most varied and contrasting landscapes and sceneries, particularly interesting depths and coasts and a mild mediterranean climate with little showers. This allows tourism during early spring as well as late autumn. 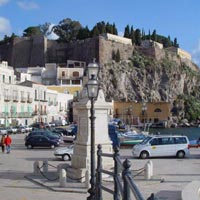 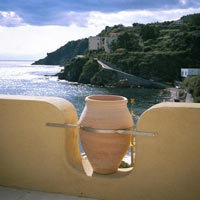 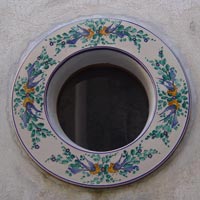 LIPARI The largest and most populated island of the archipelago. All the other islands, with the exception of Salina, depend administratively and politically on Lipari's district. There are 5 towns in the island. The Archeological Musuem, very interesting and of exceptional value, contains the whole history of this archipelago. The island id provided with three ports and many anchorages, where you can find refuge from all winds. They are all located on the eastern side of the island and suffer of strong backwash; the most protected one is Porto Pignataro, while Porto di Sottomonastero is exposed to the eastern winds. During high season it is advisable to moor at the many pontoons of the beach of Marina Lunga. Other possible anchorages are: Sponda di Vinci, south of Lipari and Vallemura (vast bay between Punta di Jacopo and Punta di Ponente) at south-west, in case of north winds; Canneto, just in front of the town, halfway down the eastern coast, with north and south winds (Scirocco). 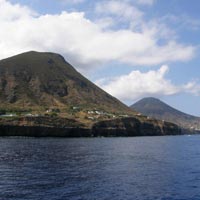 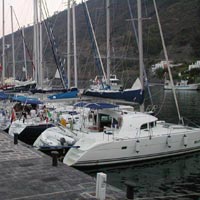 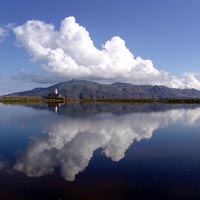 SALINA Beautiful island, called Didyme in ancient times, meaning "double". As a matter of fact the island has two cone-shaped and very high peaks connected by a low saddle. Its modern name derives from the old salt mine of Punta Lingua. The saddle and the low and narrow plain of the East coast are the inhabited and cultivated areas. The island has two little harbours: one on the east side, in front of the town of Santa Marina di Salina; the other is on the southern side (Renella); though the first one is the main one, it is not very attractive, while Renella was built by a picturesque village, inside a natural bay, that only later was transformed into a port; it is protected from the winds of the 1st and 3rd quadrants but is fully exposed to southern ones. Capers and Malvasia grapes (the Malvasia wine is excellent) are the local products and are celebrated during the gastronimic feast on the last weekend of june. 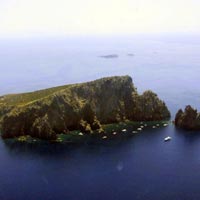 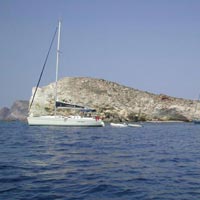 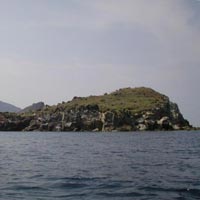 PANAREA Called Enonymos in the old ages, can be defined an archipelago in the archipelago, because of all the minor islands that suround it. Its coasts are safe and hospitable almost everywhere with great vertical cliffs on the northern side and gentle and green slopes on the eastern side. You need to pay attention when transiting at SE because of a group of rocks called Le Formiche (the ants) with low depth in the surrounding zone. The islet of Basiluzzo, NE of Panarea is worth a visit for the uncomparable view of its tormented cliffs but we suggest to go only with calm sea. Just as beautiful is the Ansa della Nave, a huge rock, 39 meters high, with vertical cliffs and located NW of the island. East of Panarea is a group of islets called Lisca Bianca whre you can see a very rare phenomenon : an underwater solfatara (sulphur spring), at 15 meters of depth. The only picturesque town is San Pietro a port with a 90 meters dock and a quay along the shore, accesible only to boats with limited draught. 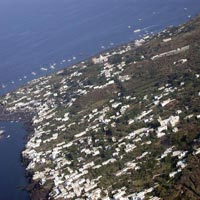 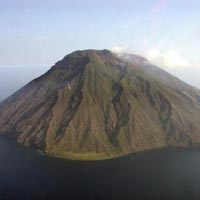 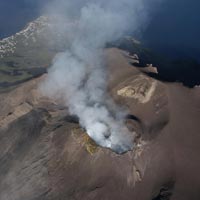 STROMBOLI A regular cone, more than 900 metrers high, was called the "Lighthouse of the Mediterranean" in ancient times. It is actually, the only volcano in the world with a regular and constant activity since at least 200 years ago. The arrival on the island at night time will eccite you because the view of the eruption is magnificent. The coasts are unhospitable: actually there are no refuges in case of strong wind from any direction and the only anchorages and only populated villages are Ficogrande and Ginostra. 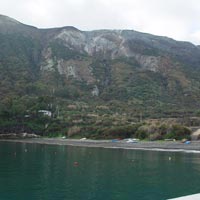 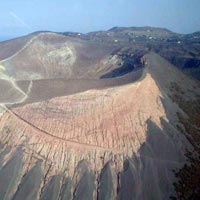 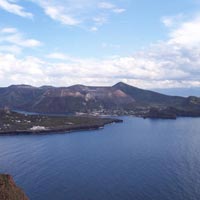 VULCANO Only a canal, 800 meters wide, separates this island from Lipari and the distance from the northern coast of Sicily is only 12 mg. It is formed by 4 volcanoes, the biggest of which is the "Gran Cratere", 386 meters high: its activity is limited to the "fumarole" (emissions of sulphur gas).Its last eruption, which completely destroyed the built-up area, dates back to 1888/1890. At the NE extremity of the island, Vulcanello rises from the sea: it is onli 120 meters high and is connected to the main vulcano by a stretch of sand. This connection formes the two bays east and west of the island: Porto Levante with its tipical black and fine volcanic sand and Porto Ponente famous and popular because of its boiling waters fed by submarine sulphur springs. The coasts are coloured, irregular and spectacular. The only port (Porto di Levante) is on the northern side and is protected only from northern winds, while with east winds the anchorage at Porto di Ponente is more convenient. 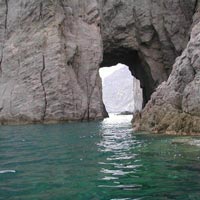 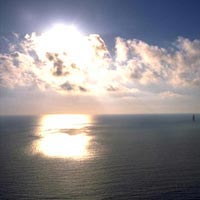 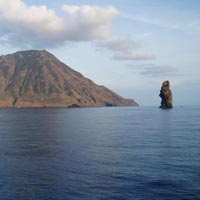 FILICUDI A marvellous island, with many grottoes, the most famous of which is called "Bue Marino", legendary home of monstrous creatures. The island is formed by three unactive volcanoes and was called "Phoenicodes" for the presence of a great number of ferns. The SW and W coasts are fringed with many surfacing rocks and shoals. The steep coasts, mostly desert and unaccessible, do not offer safe refuge. The main village (Filicudi Porto) is very modest, located on the east coast and its little harbour is actually protected only from SW winds. From the NW coast you'll enjoy the view of a spectacular volcanic obelisque, 71 meters high, La Canna, surrounded by low depth and shoals, ideal for scuba diving. 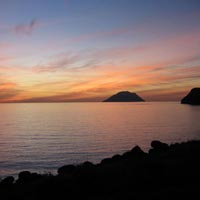 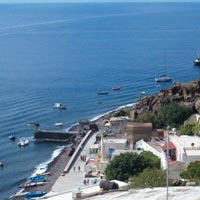 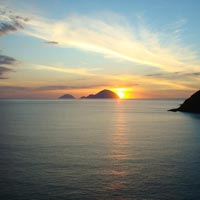 ALICUDI It is situated at the northern extremity of the archipelago and was called "Ericusa" beacusa of the great quantity of heather growing on its territory. The hemispheric shape and the volcanic origin together with the conformation of the ground are the reasons for the scarse population of the island, majorly concentrated on the eastern side. The island offers no protected anchorage and is accessible only with good weather.