These islands are situated in the Central Tirrenean Sea on the west side of the italian coast and they resemble a crown decorating the Gulf of Naples. The archipelago is formed by three major islands: Capri, Ischia and Procida.

Preferred destination of the ancient roman emperors, it is still possible to admire their villas and the works of art they used to surround themselves with. These are places of uncomparable natural beauty where you can also enjoy an ecciting stay with prestigious shopping, social and cultural events, in a unique poetic atmosphere. 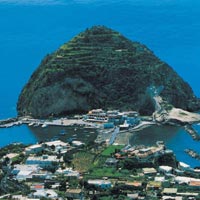 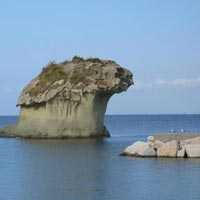 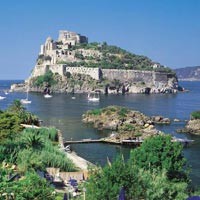 ISCHIA It is the biggest of the Flegrean Islands and is surmounted by Mount Epomeo. Ischia is famous for its thermal springs, for its mild climate and is an international tourist destination. It is characterized by a rich, luxurious vegetation, covering not only the cultivated areas (vineyards) but also the little rocks and the stones, forming the tipical "green tufa". The main port serves as the entrance to the city that extends itself all the way to the Aragonese Castle, dating back to the Vth century b.C. Other harbours are: Casamicciola, Florio d'Ischia and S. Angelo. This last one is built on the East side of a stretch of sand linking Punta S. Angelo with the main land and is one of the most picturesque corners of the island, with its unaltered nature. 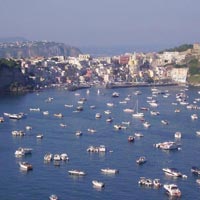 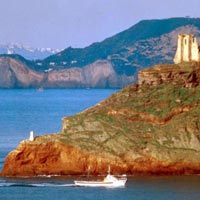 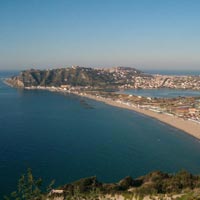 PROCIDA It definitely is the lesser known of the neapolitan islands, and owes its name to the verb "prochyo", which means "erupted". It was probably formed by the eruptions of volcanoes that are unactive nowadays. The vertical coast is made of tufa stone, but the inland presents many cultivations and gardens. The maritime and terrestrial envionment are perfectly integrated and create an uncomparable and marvellous blend. The main port of the island is Marina di Procida a fishermen's village, comprehending two vast docks: the East one is for cruisers. South of the island is the Corricella, a fishermen's harbour, where the famous movie by M. Troisi, "Il Postino" was shot and Chiaiolella, lovely fishermen's village, with its pink and yellow little houses. It is a safe achorage and is protected from all winds. During the summer, the most important event is the "Sagra del Mare" (The Feast of the Sea) in honour of "Graziella" the protagonist of Alfonso La Martine's novel. 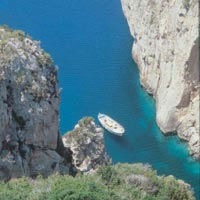 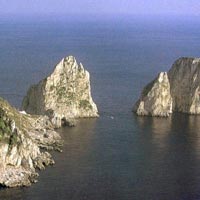 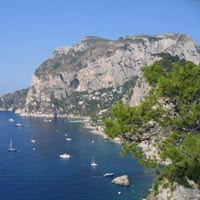 CAPRI Its name comes from the greek Kapros (Island of boars) and is formed by two districts: Capri and Anacapri. Its coasts are high and irregular. Mount Solaro is the highest peak (586 meters above sea level) from where you can enjoy a spectacular view of the Gulf of Naples. Its mild and very humid climate explains its luxurious vegetation. The island's wildlife is poor but there is an endemic specie, the blue lizard, that exists only in Capri. 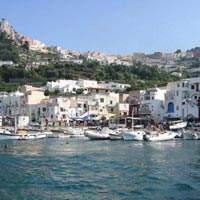 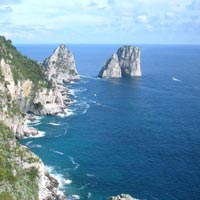 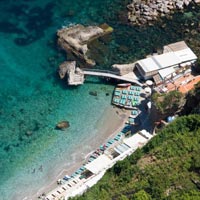 The only port of the island is on the North coast, Marina Grande, but you can also anchor East or West of this port, or, in case of North winds, in the bay of Marina Piccola (on the South side of the island). From Marina Grande you can walk to Capri or take the funicular. The ancient romans built 12 villas here and it is possible to visit the remains. The coves and sites worth a visit are: Cala di Matermania, Cala Ventroso, the White Grotto, the Green Grotto and the most famous Blue Grotto. Internationally known is the Piazzetta of Capri (the main square). On May 14, there is the important celebration of San Costanzo with a procession on the streets of Capri. 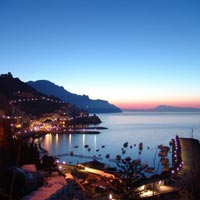 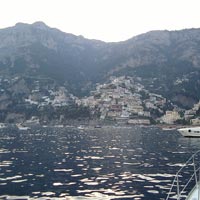 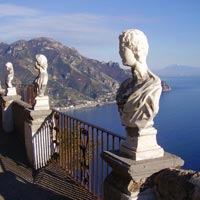 COSTIERA AMALFITANA The origins of Amalfi and the other towns of the coast are lost in the legends: according to the Greek historian Strabone (1st century b.C.) during the classic ages the "costiera" was almost completely unhabited and the only human settling lied at the eastern borders of the coast, the etruscan town of Marcina, probably today's Vietri sul Mare. In no other place you'll be able to sea such vivid and varied colours as on the Amalfi Coastline, elegant destination of prestigious visitors. The little towns are scattered like jewels on a precious crown and even the most expert tourist cannot avoid to be caught by the sight. Everything becomes a symbol here: the rich soil generating oranges and lemons, the sea with the most incredible shades of blue and green, the suggestive secluded beaches, the small islands, the white, pink, yellow little houses surrounding tiny harbours. Its charm originates not only from the places but also from the history which has left grandiose artistic evidence: churches, villas and monasteries here are among the most beautiful.